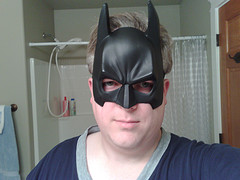 If you do anything more than passively read web pages online, chances are, you've got an identity somewhere. You have an email address (or 10). You have a login on most every site you interact with (e.g. Google, eBay, Facebook). If you use IM tools, surely you've got a name on each of those services.

Even in the offline world, you have lots of identities, depending on whom you're talking with: an identification number, social security number, multiple phone numbers, and the list goes on.

Actually, let's be clear. These aren't identities per-se, they are tokens that uniquely identify you within a specific realm. Let's call them identity tokens for the sake of argument.

Ideally, I'd like to reduce the number of identity tokens I have to manage. I'll save Aswath the trouble of commenting on my post and just say what one solution to that would be: OpenID. It has potential to solve this problem, but it's not deployed widely enough.

But let's make this problem simpler. Let's talk about identity tokens within a single "realm," or multiple realms controlled by the same company, as it were. Best example of that? Jangl.

Jangl provides their "call anyone, anywhere" service through partnerships with a number of different social networks--including Facebook--not to mention their own web portal. Each one of these social networks is a separate realm under which Jangl operates. If Jangl's Facebook application is any indication of how it works in other social networks, Jangl makes it easy to call your buddies/friends within the social network.

Federating these disparate identities within Jangl should be relatively straightforward, or you'd think anyway. I discussed this issue with their support folks and they have a solution to this problem. Essentially all the "accounts" have one thing in common: your mobile phone number. In theory, you should be able to use the same number across all these accounts provided you can provide the associated PIN.

This doesn't completely work in an ideal fashion, yet. Those of us who are early adopters are likely to have extra problems. As I write this, the Jangl support guys are trying to get my Facebook and Jangl.com accounts linked.

Given all the problems I'm having within the same company, now imagine having to do this between companies or between organizations. You can see it gets ugly fast.

OpenID would certainly be one solution to this problem: allow an account to be associated to an OpenID. Accounts that are associated to the same OpenID--with appropriate authentication, of course--could be linked somehow. Or simply use OpenID as the authorization mechanism and drop the realm-specific authentication schemes altogether.

That being said, there are times--and instances--where I don't necessarily want to be tied back to a single identity. Maybe I'm doing some testing or doing some "stealth" intelligence gathering. OpenID shouldn't be the only option.

What do you think about all this? How can we federate identities while maintaining the ability to have separate ones if you desire? Opinions are welcome.