A year ago, I had written a post about competition in the information security space, of which I work as a part of for a vendor that has been in it for nearly a quarter century: Check Point Software Technologies. A few things have changed since I wrote the post and I decided, rather than merely repost my previous post, create a new version of it and update with some relevant information. I’ve removed the old post because it largely says the same thing.

Why I’m In This Industry

The devices, networks, and social institutions we use today are only useful because, on the whole, most people largely trust them. If this trust erodes, people will not make use of them.

It took me many years of working at Nokia to realize that regardless of what I do in life, I am always going to be looking for where the flaws are in the systems and do what I can to improve these systems so they will remain trusted.

As a company, Check Point firmly believes customers deserve the best security for their digital information. That, plus my long-time history with Check Point was why I ultimately decided to go work for Check Point when they acquired Nokia’s Security Appliance Business back in 2009. The talented, smart people I work with day-in and day-out working toward the same goal is why I’m still here, even though some have left for what they see as greener pastures, or at the very least, a different pasture.

What About The Competition

One of the things I’ve always tried to do online is to bring facts, understanding, and details to light. This is what I did with the FireWall-1 FAQ back and the day and what I’m trying to do as part of my effort with Check Point’s user community: CheckMates.

You may have noticed that I occasionally delve into the subject of Check Point’s competition in my online discourse. The main reason I do this is because some of them are saying stuff that flat out isn’t true, a gross misrepesentation, or they advocate a poor approach.

To be clear, I think healthy competition is a good thing. It raises all boats, regardless of who you ultimately use. Despite our differences in approach, there is a common enemy: the malicious actors who attempt to penetrate and disrupt our customers networks. We would do better as an industry to remember that and work better together toward defeating that common enemy.

Despite that common goal, everyone who works for a security vendor, particularly in a sales or marketing capacity, wants to succeed over the competition. As part of that, each vendor puts outs information that puts their offering in the best light. Certainly Check Point has done this with some past marketing campaigns such as:

This is all part of normal, healthy competition that happens in any industry.

Palo Alto Networks is clearly a different competitor and seems to play by different rules, particularly with respect to Check Point.

Nir Zuk, the co-founder of Palo Alto Networks, drives a car with the license plate CHKPKLR. This was widely known since at least 2005 and a picture of said license plate was featured prominently at their 2016 Sales Kick Off: 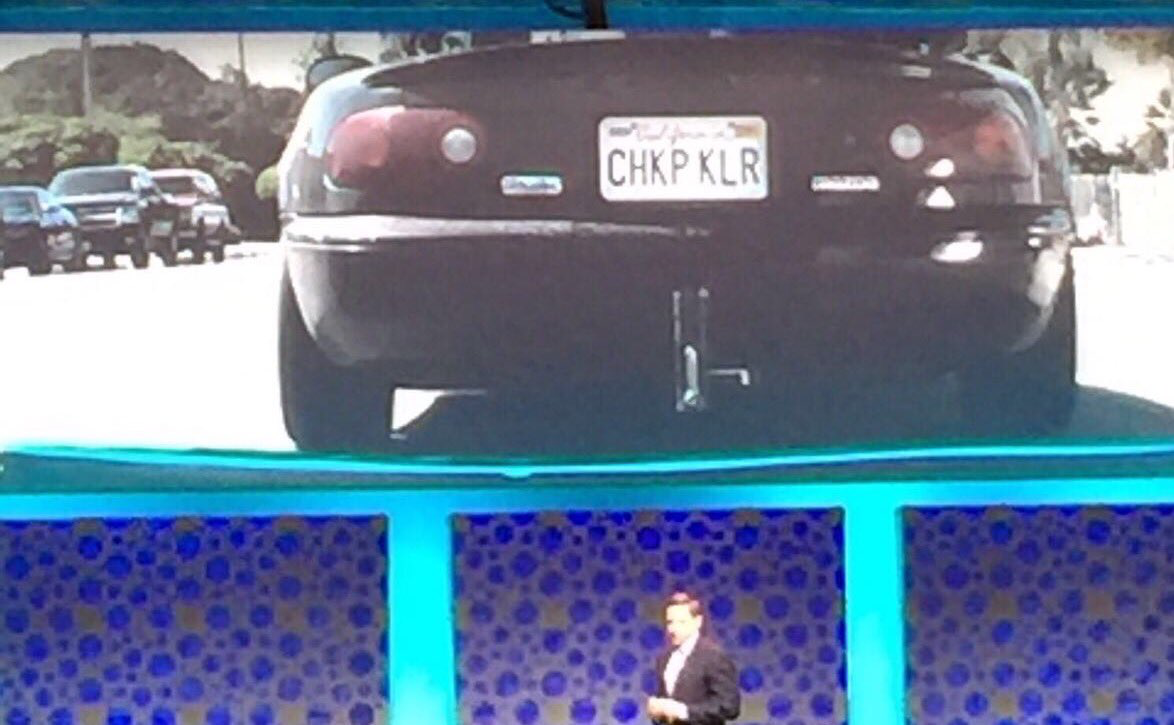 The guy up on stage? Their CEO Mark McLaughlin, propagating the “Check Point Killer” message to the assembled masses.

Over the years, I’ve heard countless stories of how Nir Zuk would come in to talk to a (potential) customer and spend a significant amount of time talking about Check Point, to the point where he was thrown out of at least one customer meeting! Given how some customers feel about Check Point, I’m sure that tactic did help to drive some sales.

In the following picture, you can see Palo Alto Networks Chief Marketing Officer Rene Bonvanie with a slide behind him of Check Point CEO Gil Shwed: 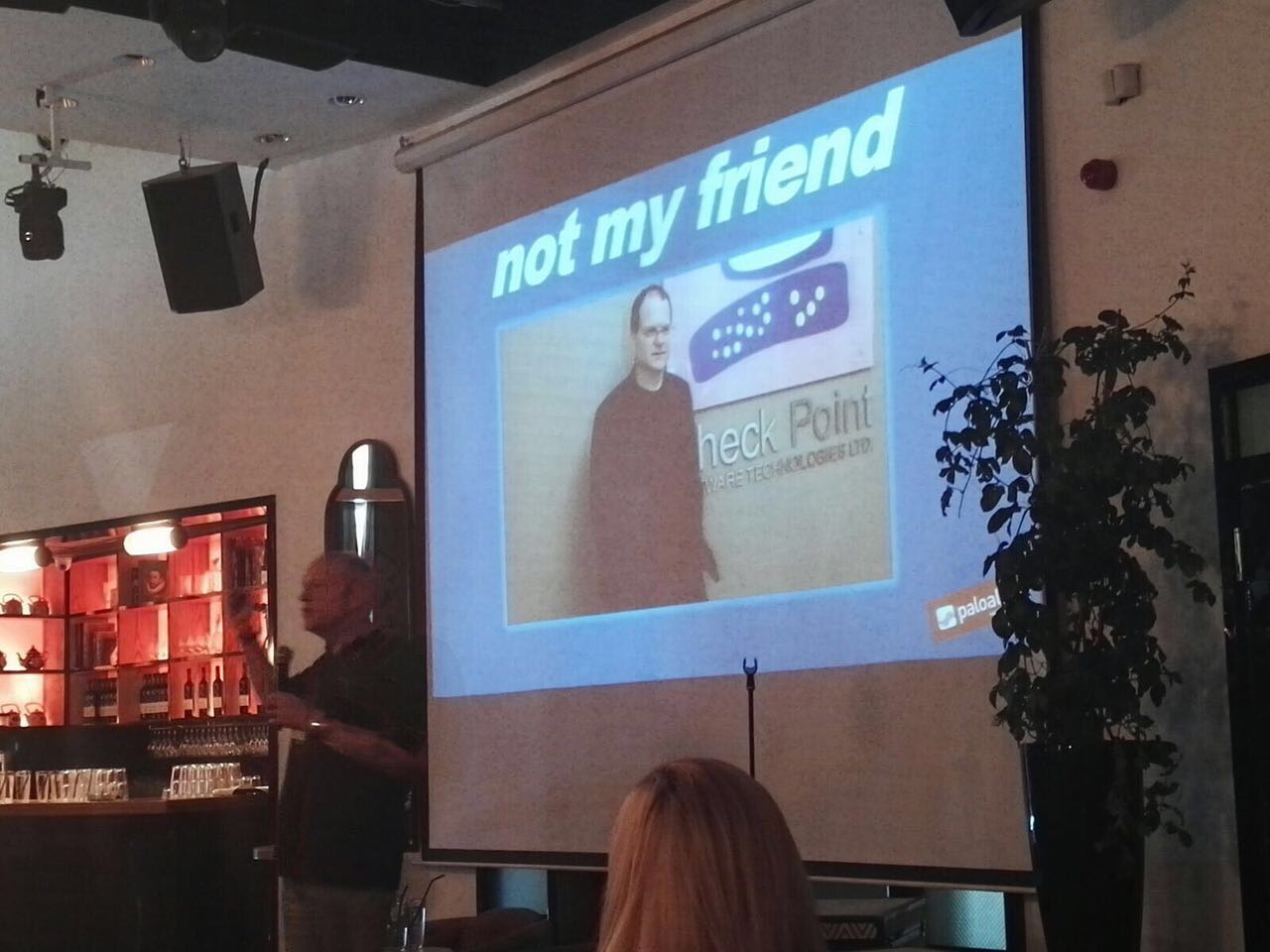 To take it one step further, it was recently discovered that Palo Alto Networks has a so-called “Check Point Kill Squad.” This was disclosed by way of a screenshot of what appeared to be an internal portal from Palo Alto Networks. There was no real information in this screenshot, just partial bullet points of a few competitive talking points against Check Point SandBlast and the fact they also have a Competitive team–nothing that wasn’t already widely known or easily to deduce.

Rather than simply ignore it, Palo Alto Networks saw fit to issue a DMCA takedown notice, causing Moti Sagey’s LinkedIn account to be temporarily suspended. Given their propensity to use EULAs as a way to prevent the truth from being disclosed about their products, using a DMCA takedown to needle someone at a competitor doesn’t seem too far fetched.

It’s clear the hatred of Check Point is institutionalized at Palo Alto Networks and that it comes straight from the top. Given they still haven’t fixed potential bypasses in their product two years after they were reported, it makes me question what business they are truly in.

Disclaimer: My blog, my personal opinions. I’m sure you knew that.